The plaintiff linked a cervical disc injury and a shoulder impingement to a head-on collision. A Nashville jury awarded the Plaintiff $80,000 in non-economic damages. 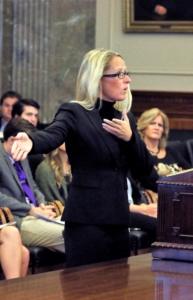 Our client was stopped at a red light in Nashville on 9-17-16. He was on Trinity Lane near its intersection with I-65. At the same time, the Defendant ran a red light on Trinity, striking another driver before crossing the median and hitting our client head-on. Fault would not be contested.

The client was taken to the ER at Skyline Medline Center where he was initially treated for soft-tissue symptoms. His symptoms persisted and he was identified as suffering from two injuries: (1) a C5-6 disc herniation, and (2) a traumatic shoulder impingement injury. His treating physicians causally related the injuries to this crash.

As the Defendant did not have insurance, the client pursued a UM claim against his insurer, State Farm. Our client’s injuries (disc and shoulder) were confirmed by a Plaintiff’s IME (independent medical expert), Dr. David West, an orthopedic doctor in Nashville. State Farm defended the case in the name of the uninsured Defendant. That defense relied on an IME, Dr. Thomas O’Brien, a neurologist in Nashville. The expert thought that our client had only sustained a temporary soft-tissue injury. O’Brien also thought that secondary gain played a role. The at-fault Defendant was never served and never made an appearance in the case.

As the case went to the jury, State Farm conceded our client had an injury but argued that was it simply a soft tissue one. The insurer suggested an award of damages of $20,000. Our client, by contrast, argued that he had sustained a serious and permanent injury. This case was tried for two days in Nashville and the deliberations lasted two hours.

As State Farm had admitted fault, the court’s instruction asked the jury what “compensatory damages” were “sustained and proven” by the evidence. Our client was awarded his medicals of $30,909 as claimed and $16,420 more in lost wages. His mental and physical suffering (in separate categories) were each valued at $20,000. Similarly he took $10,000 for past and future loss of enjoyment of life. In a final category of permanent injury, our client was awarded $20,000. The verdict totaled $127,330, of which $80,000 represented non-economic damages.

This case is the perfect example of why you want an experienced and dedicated attorney working for you when fighting an insurance company. You need someone who will go to bat for you and will take your case all the way to trial in order to get a fair value for your case. Ms. Reasonover, and the other Plaintiff’s attorney, did a fantastic job with this client’s case and was able to secure a better than expected result. If you would like Reasonover Law to take a look at your potential personal injury case, call 615-241-0405 today!